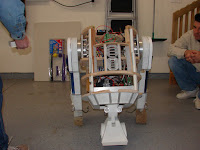 Over the weekend I got the chance to see some droids up close and personal at the builders meet in Cincinnati hosted by Daren Murrer. It was a great time & a great chance to get hands-on with some real droids.
Daren had tons of aluminum parts and was making serious progress on his electronics. Also, his new dome project seems promising. Some of the planned improvements would be a serious step up from what is currently on the market. 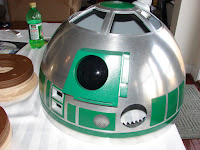 Brian Byczynski brought his green R2 dome and despite having a real troublesome dome, has really produced a fine looking piece.
David Reed's R2-D2 is currently going through some renovations, but was great none-the-less. His creative electronics were especially entertaining. Having been through the whole process before, he had tons of insight into the whole build process.
Ryan Huffman made it down and showed off some of his awesome aluminum parts and some R2 DVDs.

Special thanks to Eric for coming along for the ride and taking the pictures.


If you have a chance to take a day with fellow builders I would highly recommend it. Being able to really see all the parts come together is extremely important for new builders. I never had an idea of the size and complexity of an astromech. Above all else, it's a great motivator to get working on a droid!
Posted by Cole Horton