Opening Ceremonies and The Clone Wars Red Carpet Premier - No party is complete without a few R2s, and I was part of the team of droids at both the Celebration opening ceremonies and the Clone Wars Season Five premiere.  Both were a great excuse to get out of the droid builders room and be part of some of the show's biggest events.

Star Wars Detours - At Celebration IV, I sat in the audience and watched the announcement of Star Wars: The Clone Wars.  Five years later, I was fortunate enough to sneak into the reveal of Star Wars: Detours.  Matt Senreich and Todd Grimes were some of the nicest guys at the con.  I can't wait to see more of what they have in store. 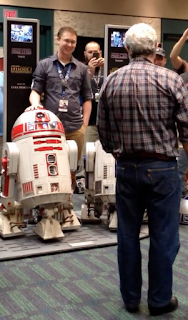 George Lucas visits the R2 Builders - For the second Celebration in a row, the creator of Star Wars stopped by to visit the R2 Builders room. This time was much less hectic and the group photo at the end was perfectly played.

Patch Trading - After having a blast at TrooperFest (November 2011) trading patches with some of the best in the world, I was intent on growing my modest collection at CVI.  Nearly every night was full of trading and trades could happen at any moment; no time was the wrong time to make a trade.

Announcing the TroopAthlon - Angela Mash and her team created a perfect TroopAthlon event that I had the honor of announcing the games.  The competition was well organized, smooth, and quite certainly entertaining.  Congrats to the team "Veers Mountain Militia" on their repeat TroopAthlon win.

Winning the Droid Races - After a clear first round loss to co-builder friend Daren, we both won out our brackets and met again in the finals.  With one loss under my belt, I had to win twice in a row to take first place.  Two very close races later, I was the CVI champion in the NPC Motor division.

The 501st Banquet and Bash - Not only was the Banquet a great way to get a real meal during the convention, it was good to meet some new folks and visit with a few old friends.  The highlight for me was a visit by Ian McDiarmid doing his Emperor's voice!

Kenny Baker's Birthday - The R2 Builders managed to pull the entire room of droids within feet of Kenny's table to surprise him on his birthday.  The visit was capped off with a round of builders singing Happy Birthday!

The Rancho Obi-Wan Experience - After a year of watching Rancho Obi-Wan grow as a non-profit museum and invite fellow fans into the Rancho to explore the collection, I was thrilled to hear that Steve Sansweet and team were bringing a small taste of the museum to Celebration VI.  The collection did not disappoint!
Posted by Cole Horton