A Lucky Paint Find and Some Changes in Store 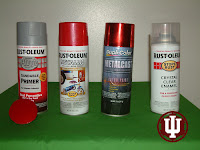 You might have read in some older posts about my original paint scheme. Back when I was trying to find my red color, I had wanted to mimic the Kelly Krider method found at astromech.net. What has come to be known as "Krider Blue" was a multi layer effect with two different metallic blues with a clear coat. When I looked back home in Evansville, I could not find the Rustoleum Metallic red to substitute for the Rustoleum Metallic Blue. Instead, I just had to use a burgundy color as my base coat. This was a nice color, except for it was not as metallic at some R2 blues, and it was pretty dark. Especially against aluminum in low light, it was a small concern for me, but one I thought I would have to live with.

Yesterday on my way to Lowes to pick up some drill bits, a stopped train was blocking the road to the store, so I decided just to go to the Menards (a store only found in Bloomington and north). Back by the paint section, I was pleasantly surprised to find the counterpart to the metallic base coat used by Kelly and other builders.

So the new Red is comprised of:

Sandable Primer
Rustoleum Metallic Red
Duplicolor Anodized Red
Clear Coat
I tested it and it looks great. It is a lighter shade than I had developed before, but it has greater dept and metallic qualities. It is slightly less IU Crimson, but its is a better match to the R2-D1 seen in Episode I.
Posted by Cole Horton