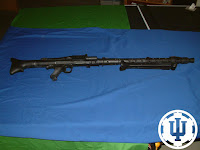 As a holiday gift to myself, I picked up this hyperfrim MG-34 during their Holiday sale. I've had one of these bad boys on my radar for a while, and now was the perfect time to order. The replica gun is made of Hollywood stunt rubber, and is extremely light.  Of course, its non-firing, but what it lacks in true firepower it makes up for in flexibility.  This is great for trooping, stunts, or just playing around since you can carry it all day, drop it, and let onlookers check it out.

Back when I first bought Stormtrooper armor in 2004, I purchased a Hyperfirm E-11.  The detail in both is superb, right down to the serial numbers on the original gun. Before I saw one in person, I was afraid what a 'rubber' gun would feel like. This stuff is solid, and feels substantial in your hand. It looks like the real thing too.

For more information on Hyperfirm replicas, go over to http://www.sci-fire.com/  There you will find information on how to weather the replicas and even a great tutorial on how to woodgrain your MG-34.
Another big plus for purchasing this weapon is the fact that it was a World War II replica.  The MG-34 was one of the most feared machine guns of the Second World War.  The gun just happened to be used by Stormtroopers and Sandtroopers when Star Wars was Filmed in 1976/1977.  The Mg34's in the movie were actually outfitted with resin receivers, as noted by Braks' Buddy in his awesome resource found here.
Posted by Cole Horton