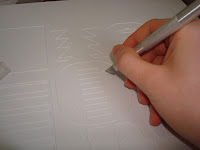 Earlier this year, I really wanted to build some of my remaining parts by hand using styrene plastic. I eventually made some decent coin returns, but progress on other parts was less than stellar. While the idea was noble, I realized that I could make all of these parts in seconds with a CNC router owned by another builder.

Using the club blueprints, I changed the PDF files to vector images in Adobe Illustrator. 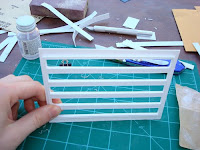 These files were then converted to CAD and plugged into the machine. A few trials later, I had all the parts I needed.

The parts are scored by a knife, and just need to be punched out. Thin areas are cut with a knife to ease removal. After everything is glued up right, I'll use Rustoleum metallic paint to make them look like aluminum.
Posted by Cole Horton