Business 101: Why We'll Get a Yearly Star Wars Movie

At Cinemacon yesterday, Disney Studios exec Alan Horn confirmed that they would release a new Star Wars film every year. They'll start with J.J. Abrams-directed Star Wars: Episode VII and release the next chapter in the trilogy in 2017. In between the trilogy stories, additional stand-alone films will be released; the first being written by Star Wars-alum Lawrence Kasdan. Some have seemed surprised by this pacing - but from a business standpoint, a Star Wars film every year is really the only choice. Allow me my soapbox while we discuss the basics of corporate strategy. 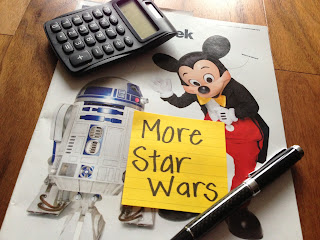 As a publicly traded company, Disney commits to its shareholders growth each year. The price of its stock and its ability to invest in the future depends on delivering that growth quarter after quarter. The safest and most common strategy to deliver growth is to redeliver your base building blocks and then find news ways to either make it bigger or add another building block.

A steady drumbeat of films is also crucial for merchandise sales. The number one driver of consumer goods sales (like those action figures we all love) is distribution. Having a film in the theater helps guarantee Star Wars merchandise will be in more stores, with more items, on more pegs. After a monster merchandise year in 2015, sales can only remain strong if distribution holds true in 2016.

Simply put, Disney can't consistently grow unless it does the same thing it did the year before. Not having a Star Wars film each year would leave a massive gap to fill. To keep Wall St. happy and growth steady, a yearly Star Wars movie is the only way forward. Stock holders are happy, fans are happy, and I'll happily take a yearly dose of Star Wars!
Posted by Cole Horton