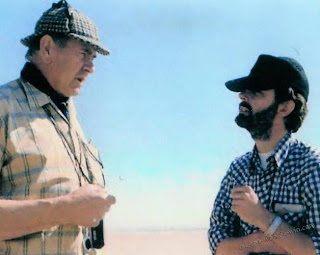 Cinematographer Gilbert Taylor, best known for his work on Star Wars, passed away Friday at his home on the Isle of Wight. Taylor was 99.

Taylor worked as Director of Photography on Star Wars, filming alongside director George Lucas on location in Tunisia and in studio in his home country of England. Due to creative disagreements, he did not return to work on the successive films in the franchise, but he did return in 1996 to capture new footage for Parker Brother’s Star Wars: Interactive Board Game where original props and costumes were used to outfit Darth Vader actor David Prowse. James Earl Jones recorded new lines for Vader’s speaking parts to accompany the game footage.

In November 1939, Taylor joined the Royal Air Force Volunteer Reserve “and did what was supposed to be a three-year photographic course in 16 weeks.” This brief wartime training led to six years of wartime service as an officer and operational cameraman. Although he was trained to fly as a mid-upper gunner in Lancaster bombers, his primary mission was to photograph the targets of nighttime raids over Germany after the bombs were dropped. “This was requested by Winston Churchill, and my material was delivered to 10 Downing Street for him to view. He was keen for the public to see what our lads were doing. I did 10 of those operations, including raids on Cologne and Dresden. On the opening of the second front, I took a small operational unit of cameramen to cover every kind of news story, including the [liberation of the] concentration camps and the [signing of the] armistice. You may ask how these experiences helped to prepare me for my film career. Well, they certainly made me tougher.”

After the war, Taylor worked on such films as The Dam Busters (1955) and used that experience to film the Death Star trench run. He recalls, “They were very worried with how they were going to do the special effects….it became rather like The Dam Busters flying over the damn, except they were flying down the gully. And when they came out of it all the maneuver were the same as they were on The Damn Busters.”

For more on Gilbert Taylor and his career, see http://www.bbc.co.uk/news/entertainment-arts-23808854