The Second World War's Turn Towards Truth in Reporting

Put yourself in September 1943: nearly two years have passed since The United States declared war on Japan after Pearl Harbor.  Millions of men and women had been mobilized for war, industry was almost entirely focused on the war effort, scrap drives and rationing were in full effect.  Thousands of soldiers had already died in battle, but for American's on the home front, no photos of American dead had been allowed to be printed for the public to see.  On September 20, 1943, that changed. 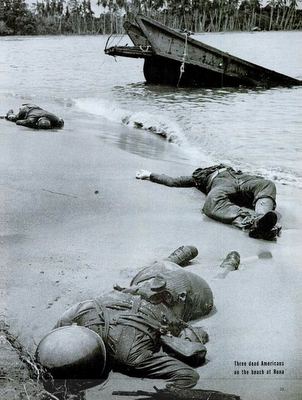 This photo, taken a year earlier in 1942 on the beaches of New Guinea, was finally approved by President Roosevelt to be shared in the pages of LIFE Magazine.  The black and white photograph of three American soldiers, faces hidden, was printed on page 34 of the issue and was the first time american dead were shown to the public.

This represented a turning point in wartime reporting.  No longer would the American public be shielded from the reality of war.  It was by no means the end of propaganda and censorship during the conflict; most of what the public saw was thoroughly approved by the war department until the end of hostilities.  Even the editorial that accompanies the picture is full of wartime rallying.  But this single photo in this single magazine marks the beginning of more realistic and truthful reporting of the Second World War in America and is worth a read.  The full magazine is available from Google Books here: http://books.google.com/books?id=UlAEAAAAMBAJ&lpg=PA25&dq=life%20september%2020%2C%201943&pg=PA27#v=onepage&q&f=false