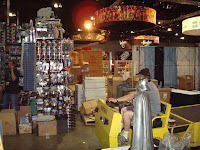 When it rains, it pours! Wednesday morning started early with my first real adventure into the convention center. Armed with my associate badge (the new inside joke for my friends) and the camera I used the first part of my morning to get some bearings.

The convention center is huge: the pictures and maps don't do it justice at all. The two halls were connected by a long hallway that had two levels packed with programming. In one end was the CIV store and the other the exhibit hall. I first made my way to the droid builders room with new dome in hand. It was basically empty except for a few members waiting for the first wave of droids to be carted in. The union wasn't nearly as bad as I imagined, but it still would have been nice not to have their help.

Next was a stop at the other end of the convention center at the 501st booth. By this time, it was nearly finished and ready for all of the coming action. Considering all of the changes and stages it went through, I was very impressed.

After that, we went took a walk down town to eat at a fancy Italian place that tasted great. Again, portions are huge so share the meal. After lunch, we kept wandering around the city letting all the big city bustle run around us.

To round out the day, we spent the evening in Hollywood with folks from Evansville. Not only were there tons of tourists, but American Idol Finals had just ended so the buzz was great. There was a pilgrimage to the Chinese Theater and a feast at a Los Angeles staple: In n Out Burger.
Posted by Cole Horton