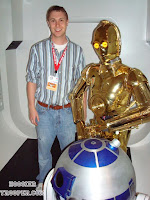 Thursday was opening day for me and the rest of the Hyperspace world. While the programing was limited, I was able to get a lot of stuff out of the way. First was a tour of the now finished exhibit hall, followed by line-free visits to the Lucasfilm archives and Painted Helmet exhibit. Then came my shift in the droid room, where I was relegated to controlling the line for the amazing blockade runner set. The Droid Builders room had more traffic than the archives!

After that, it was off to the art show, exhibit hall, and autograph area. I picked up signed pictures from Julian Glover (General Veers/Walter Donovan), Richard LeParmentier (Admiral Motti), and Ian Liston (Wes Janson). I also took one of of my Crimson painted arms for Kenny Baker to sign. All of them came out great and can be seen at my gallery.

Last but not least was the 501st Legion Mixer. The stars were there and some of us Bloodfin guys even got our pictures taken. It was a long and exiting day at Celebration! 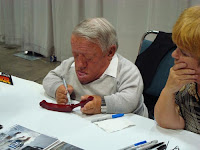