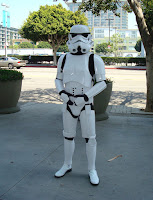 Seven days of nerd heaven... but now its time to get back to reality. All of the convention pictures have been posted in the gallery.

I met some awesome people, and finally put faces to online personalities. The 501st Legion Trooper Olympics were a hit and everything fell into place. Being able to act on stage for opening ceremonies was a highlight, as was the conversation with Carrie Fisher and Family Guy Star Wars panel. The Clone Wars cartoon footage was breathtaking, and the droid builders room was always busy. The biggest surprise of all was that Jennifer actually had fun too. I was surprised at the number of non-fan significant others who tagged along for the nerd convention.

Having attended both CII and CIII, I must say that Celebration IV was considerably better. Despite not having a new movie to look forward to, planning was light years ahead of the previous conventions. The LACC itself was beautiful, spacious, and interesting. On top of it all, we had nearly all positive experiences with GenCon staff.

I hope to see everyone at CV!
Posted by Cole Horton