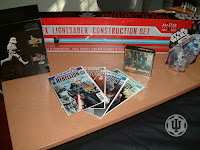 Being a Star Wars fan means one thing at Christmas time: you're never too old to get toys under the tree. Everyone knows that I'm a softy for anything from a galaxy far, far away, so many of my gifts are Star Wars related.

The first thing I opened was a Master Replicas custom lightsaber kit. This thing is tons of fun, even though some critics gave it a negative review. They complained that the blade was shorter than normal FX sabers, but I prefer this size... a longer blade means more broken lamps. The blade can be changed from Red to Green to Blue with the switch of a hidden button. I was surprised that a number of parts are actually metal and make the saber feel pretty solid. Other pieces are plastic, but they sure look cool!

In my stocking were the last few issues of Rebellion I needed. To decorate the bookshelf I got a Gentle Giant animated Stormtrooper statue and the Jawa minibust two-pack. The coolest part about those busts is the R5 head that one of the jawas is examining. I guess he's looking for that bad motivator. To further fill the bookshelf were two books: The Star Wars Vault and Dressing a Galaxy. The later is a must for any costumer, especially folks who like prequel-era material. The Vault has been getting rave reviews, and I have to give it my full endorsement too. Being able to touch and see replicas of Star Wars related items and read the story behind them is a lot of fun. I'll probably do a whole post about this book... and barely touch the surface. Be sure to look for the picture of the R2 builder's club at Celebration III.
Posted by Cole Horton