Following the From World War to Star Wars presentation at Star Wars University at Celebration VI, my wrap-up of the event was highlighted in this months Star Wars Insider Bantha Tracks feature edited by Mary Franklin.  The photo from the lecture is taken during the exploration of Sir Alec Guinness' time as a Lieutenant in the Royal Navy Volunteer Reserve.  The photo behind me is a shot of Guinness and his crew in front of Landing Craft Infantry (LCI) 124 - the ship he commanded and eventually lost in a storm during the war. 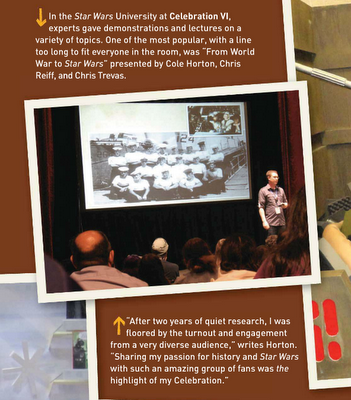 The From World War to Star Wars highlight is in Star Wars Insider Issue 137 (November/December 2012).  It is available on newsstands now or you can download the digital edition from Titan Magazines.  Also, don't miss this issue's well-researched article on the links between Indiana Jones and Star Wars.